Nitrogen has one of the largest impacts of all the contributing factors to production costs and yield. Small improvements to N utilization can boost profitability. Measure and apply the right amount of N at the right time with 360 Yield Center’s new tools.

Get your corn off to a great start with a base rate of N in the fall or spring–but save some for later! Your corn uses almost 75% of its overall N needs after V10. If it runs out after pollination, growth will shut down, ears will be shorter, and grain fill will suffer. Avoid the risk of losing your N early, then test mid-season to see how much is available and refuel!
With 360 SoilScan, you can test your N availability and soil pH to avoid a guessing game. The Corn Nitrogen Need Calculator builds an N recommendation based on your yield goal, corn growth stage, and soil organic matter. You can apply within minutes of measuring your soil!
Feeding your crop later in the season is key for your crop to reach its yield potential. 360 Y-Drop gives you the flexibility and control to apply N anywhere from V6 to tassel. And location is just as important as timing. “A corn plant acquires more than 60% of its N from a horizontal radius of about 7 inches from the stalk base.” Y-Drops place liquid N at the base of the stalk for rapid uptake.

This trial compared eight different application plans with 16 total passes in the field and compared the yield impact of mid-season nitrogen application with a one-and-done approach.

Split nitrogen application in this trial improved yield as compared to the control (200 lb. of N applied preplant). The trial also showed that the addition of 360 Y‑Drop N application increased yield by an average of 29.5 bu/A. In low ground areas where heavy rain had a large impact through ponding, 360 Y‑Drop boosted yield by 35 bu/A. 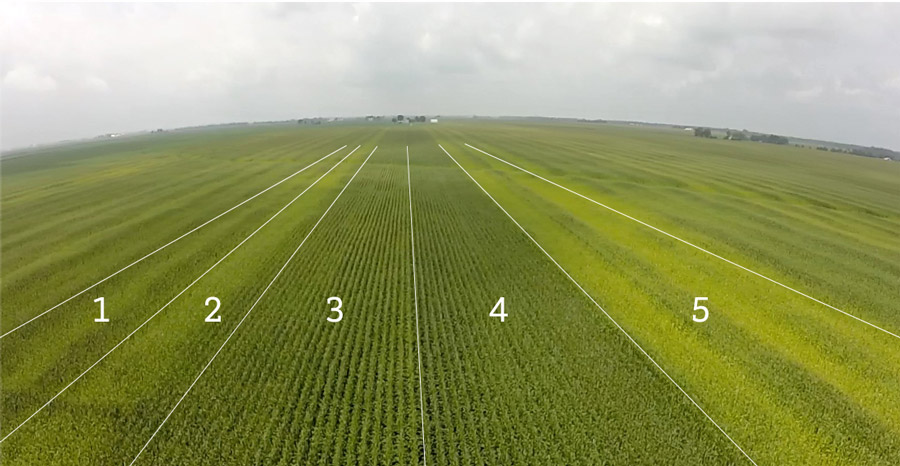 By using in-field soil testing equipment, the farmer knew exactly how much N was needed to finish the season and the yield results paid off. In the strip where 150 lb. of nitrogen was applied at V9 per the 360 SoilScan recommendation, the yield was 212 bu/A — the largest yield of the entire trial.

By applying N later in the season — where 125 lb. was applied pre-plant and an application at 100 lb. of nitrogen at V9 with 360 Y‑Drop was used — this grower experienced an advantage of 32 bu/A for split-nitrogen application compared to one-and-done application of 225 lb. of AMS pre-plant.

This side-by-side central Illinois trial compared N timing and placement with 360 Y‑Drop versus a coulter. The coulter application was done at V6 (early June) and the 360 Y‑Drop application at V16 (early July). Both sidedress applications were 150 lb. of N after 100 lb. of N was applied as a base on the whole field, including 30 lb. with the planter (2×2) and 70 lb. of weed and feed worked in with a vertical tillage tool just prior to planting. This yield map shows actual harvest data and yield results.

This side-by-side trial in Southern Michigan aimed to compare yield impacts of traditional sidedress applications at V6 with a coulter bar with a mid-season N application at V10 with 360 Y‑Drop. The same amount of nitrogen was used for both applications — timing and placement were the only variables.

Historical rainfall totals early in the growing season put much of the N applied at V6 at risk of loss in the environment. In contrast, the V10 application of N with 360 Y‑Drop repositioned N when the corn’s needs were larger.

Get more information on these and other trials to see how the base-plus approach works. And, keep an eye out for a full Yield Book that will outline more than 100 studies from across the Corn Belt, which will be available soon.